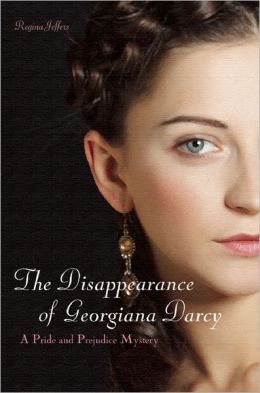 THE DISAPPEARANCE OF GEORGIANA DARCY
by Regina Jeffers

Jeffers is a writer focused on the Regency who has made a career out of spinoffs of Austen's novels.  Not to imply that her imagination is lacking in any respect; she has explored everything from the traditional follow-up to tales involving ghosts and vampires.  I initially wanted to read this novel because of its promoted Gothic flair.  Austen was obviously someone who enjoyed poking fun at the Gothic novel craze of her own time, as we see with NORTHANGER ABBEY.  Jeffers's novel promised clanking chains, wet, dank prison cells, amnesia, all the hallmarks of a true-to-type Gothic story.

The premise of the novel is, as the title simply puts, Georgiana Darcy's disappearance.  Married to Colonel Fitzwilliam and setting up their home in Scotland while her husband is away at war, Georgiana somehow goes missing on the moors.  Once Fitzwilliam arrives back in England and he and Darcy become aware of her disappearance, the pursuit is on.  Jeffers flips us back and forth between the Darcy family's search and the ongoing story of "Lady Esme," a captive in a Scottish castle who has no memory of her life prior to awakening in her cell.  George Wickham also makes a somewhat useless appearance and remains a player in the storyline despite the lack of necessity of his presence.  Presumably he is there ot act as the bad boy, though the novel has no need of a second one.

I have enjoyed others of Jeffers's novels.  This one, however, was too off the wall for me.  As I said previously, Jeffers does not shy from the monster mash-ups of Austen, as with her "Vampire Darcy" book, which I applaud.  But even compared to those, some of the threads of this story in particular are a bit over the top.  Without giving away the tale, I can say that Jeffers incorporates cannibalism, incest, and mysterious ghostly aides.  Elizabeth carries a gun and is excitedly ready to blow someone away with it; despite being a married woman, Georgiana is completely affronted by a man's removal of his shirt in front of her, as though he knew he was being a little "rapey" and he liked it.

Lady Esme is about eight months' pregnant when she wakes up in captivity.  Which, whether you believe she is Georgiana or no, makes little sense, as she and Colonel Fitzwilliam are together for only one night before he must leave for battle, and he's been gone for about six months' time.  When Fitzwilliam despairs that his wife may be pregnant and alone, Darcy tells him, "Nah, she wasn't pregnant when I last saw her about six weeks ago.  Then again, maybe she didn't want to tell me and Elizabeth...."  I suppose this implies that looking pregnant is a choice.  But Georgiana speaks during the novel about her baby.  I felt throughout that I'd somehow missed something, that Fitzwilliam must have returned to England for some wedded bliss a FEW times, though he certainly hasn't, or that maybe Georgiana is so sylph-like that she can carry a full-sized baby while looking merely a hint bloated.  I ended thinking perhaps a red-coated ghost got her pregnant while leaving all of his clothes firmly on.

The end of the story explains some of the out-of-place bits which occur throughout the first three-quarters of the book, but by then, the reader is, most likely, thoroughly confused.  Jeffers was obviously attempting a high level of suspense, but she instead created a badly blended haze of intact memories, amnesia, and out-of-character behavior for her protagonists.  Gothic it is, but not in the style of Austen, nor is it true to her characters as the back cover boldly declares.
BARNES & NOBLE LINK