Here are photographs and bios of our current Board members.

Anthony first encountered Jane Austen in high school, when he saw Emma Thompson's version of Sense & Sensibility.  He had the great good fortune of coming into the Janeite orbit just as PBS’ "Jane Austen Season" aired, and this confirmed his new interest--and began his particular love of Northanger Abbey.

Anthony first heard about JASNA in 2013 through Amy, when he volunteered to act in the region’s very first "Scenes from Jane Austen".  Anthony went from being a JASNA helper to member, and is happy to be putting his love of Austen to good use, whether through portraying her characters, lecturing on her works and era, or any other happy tasks that may be required of him.

When Anthony isn’t actively Janeiting, he is a professional genealogist.  He enjoys those quintessential Regency-era diversions, English country dancing and whist, and loves reading about almost any aspect of the 18th and early 19th centuries.  He is equally devoted to the Inklings, and loves to read history (especially on religious subjects), garden, and write. 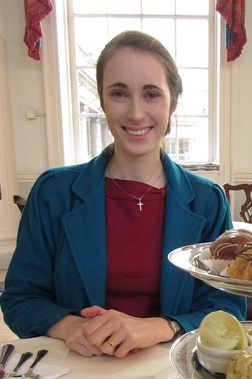 As an awkward and nerdy pre-teen, Amy discovered Jane Austen through the invaluable advice of a friend who lent her the 1980 adaptation of Pride and Prejudice.  This revelation fixed the course of Amy’s future life.  She quickly read the novel and developed an insatiable thirst for all things Austen.  That summer, on a trip to England with her parents, she insisted upon visiting Chawton and Winchester (her very literary parents were happy to oblige).  And when school resumed, after she had finished her homework every night, Amy could generally be found lurking in the pages of “The Republic of Pemberley,” the preeminent Jane Austen site on the web in the late 90s.  In eighth grade, she embarked upon a research project about the life and times of Jane Austen, and her investigations led her to the Jane Austen Society of North America.  She joined their ranks immediately and attended her first AGM in 1998, in Quebec City .  Fortunate to belong, at that time, to the scholarly and active Rochester, New York region, Amy found herself at home among her fellow Janeites, who encouraged her curiosity and always supported her endeavors.  As an undergraduate at William and Mary, she adapted Northanger Abbey into a stage play which she produced as an independent study with the theatre department.  For the past few years, she has been dabbling with several new Austen-related projects, and last summer debuted a new musical version of Northanger Abbey in a well-received staged reading.

Other than the works of Jane Austen, Amy is passionate about history, faith, and ice cream, and spends her time writing, dancing, singing, sewing, and occasionally interpreting in Colonial Williamsburg programs.  After a long and arduous academic journey, she is now an adjunct professor of history at William and Mary.