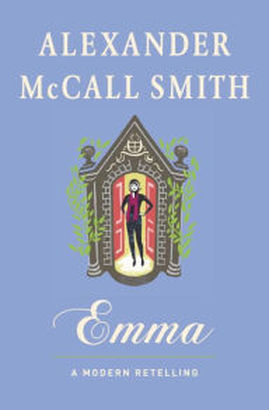 Jane Austen declared Emma “a heroine whom no one but myself will much like.”  Of course, that sentiment has been proven untrue countless times since the novel’s publication.  THIS Emma, however, well, she’s as dislikeable as Austen thought her first may have proven to be.

McCall Smith was offered this opportunity of a modern retelling of Austen’s classic; he did manage to set Highbury in modern-day England, but that is ALL he was able to accomplish.  McCall Smith’s Emma is a vicious snob, someone who manages to insert references to her monied lifestyle and her complete independence from the confines of others’ mundane lives with every breath.  Miss Taylor, the lovely, maternal governess, has been rewritten as a dimensionless, Scottish prop, full of “appropriate comments” and yet seemingly unnecessary to the plot.  George Knightley, the warm and guiding hero of the original, is here someone with whom Emma barely interacts.  He is an afterthought, as a neighbor and as the brother of her sister’s husband.  Harriet has less common sense than seems possible; Frank Churchill is inexplicably written as a closeted homosexual; the rest of the “updated” characterizations are as nonsensical as the former.

This new Emma frequently pauses to listen to her inner voice asking if what she just said was rude, untrue, an outright lie; 100% of the time it is, but she justifies it on a weak pretense and then proceeds as though nothing happens.  In the final chapter of the book, she is suddenly morally reformed, terribly apologetic for her past behavior, and wildly in love with Knightley, with whom she has had a total of three interactions throughout the novel.

McCall Smith may have been asked to write this modern retelling, but he was obviously a terrible choice.  Austen’s novel works so well because, despite the timeless lessons it gives, it was set in a more delicate time, where governesses could be companions, where one’s presence was justified simply by being wanted.  McCall Smith unceremoniously takes Austen’s cast and dumps them in 2015 England, with modern clothes, modern devices, and truly horrid “modern” behaviors.  A complete failure.